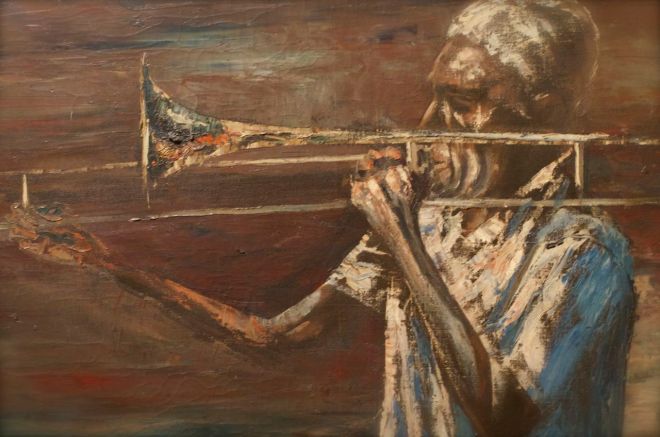 Noel Davis was already famous in the early 60s when he escaped from New York, setup shop in New Orleans, and did something that tempts everyone at some point. He stepped into the mist of The French Quarter, changed his name, and started over. For the next 30 years Noel Rockmore owned the canvas in The Quarter capturing the remarkable quirky spirits who played jazz and saved jazz in the 60s, 70s, and 80s. “The Quarter” is evoked through architecture, creole cuisine, and a particular style of jazz but even more so by the people who live, party, and bask in its unique noire. Rockmore’s subject was people. Especially the people of The French Quarter—and Preservation Hall. Founders, caregivers, musicians. People like Alan Jaffe, Larry Borenstein, Mike Stark, and musicians like Bill Russell and Chicken Henry. These people inherited The Quarter in the 60s and under their tender loving care they saved a piece of American culture. In the Summer of ’77 we became friends with Mike Stark and during our stay at his place in The Quarter he introduced us to a few of these out-of-time spirits and arranged a private tour through the Hall attic where items were being stored for a future museum. Many of those items are now on display with several Rockmores at The Old US Mint Museum in The Quarter. Seeing them again after so many years made time stand still for the rest of the trip.

Noel Rockmore used to setup at Preservation Hall where he’d feverishly paint the night in the dim halo of the Hall. Musicians were often invited to sit for a portrait the next day at Rockmore’s studio. A few of them are still in the Hall fixing the audience with an eerie stare. Rockmore was haunted by The French Quarter. It’s hard to say whether Rockmore captured The Quarter or whether The Quarter captured him. But they were meant for each other. 5 years ago 1400 Rockmores were discovered in a storage facility in New Orleans collected there by a loyal friend and patron over the course of 35 years. Possess one and you have an American Master. Rockmore’s people of The Quarter are all gone now. But that thing they did there will live forever.

4 thoughts on “Noel Rockmore & The Quarter”